Creating a Waterfall in a Planted Aquarium
I was curious as to how the tank above, which took World Ranking 7 in the ADA aquascaping contest this year, created the waterfall illusion. I had seen similar effects created by rising bubbles, but this seems to end before reaching the surface, meaning ...

21 Places To See Before You Die
No matter how advanced our cities and technology is, eventually we get tired of all the noise, stress and crowd of the city and want to be in the nature.
Beautiful underwear for Teen

Bill Gates Gets The Last Laugh
That is so adorable ! they've all ended up being just like Microsoft.

How to fix any computer
Windows, Apple and Linux
Sexy Female Model Korean

Zodiac Body Painting
Here's a set of body art paintings based on the astrological signs of Zodiac. It's pretty amazing how deceptive some of them are - you can't recognize human being on quite few of them! Which zodiac sign are you?
Sexy Park Min Young with Solb

Whoa! This is awesome! Breaking a world record seems to be a popular way to get a lot of free publicity lately. We see a lot of companies gather all their employees to break world records to celebrate their company’s anniversary, to promote a good cause, or even just to raise morale. About six months ago, the creative people at World’s Finest Chocolate broke a world record by making the largest chocolate bar which weighed in at about 12,000 pounds.

If you say you have nothing to hide, try spending a few nights in the see-through house located in Tokyo, Japan. Built by Sou Fujimoto Architects, this 914 square-foot transparent house was inspired by our ancient predecessors who inhabited trees. While so-called “House NA” offers plenty of daylight, expect no privacy here.

“The intriguing point of a tree is that these places are not hermetically isolated but are connected to one another in its unique relativity. To hear one’s voice from across and above, hopping over to another branch, a discussion taking place across branches by members from separate branches. These are some of the moments of richness encountered through such spatially dense living,” says Sou Fujimoto.

They look like they could be the roots of a tree, the delicate veins on a leaf or seaweed waving in a current. But these are actually satellite pictures of rivers taken from above. The aerial shots reveal interlocking streams and the complexity of some river deltas, leaving us to marvel at natural wonders.

If you were asked to create a portrait for a classical musician, what would the picture look like? I guess even if you did the job perfectly, the result would still look boring!

Denmark-based photographer and cellist Nikolaj Lund decided to reinvent the portraiture of classical musicians by taking the subjects out of their natural environment – the orchestra pit – and asking them do strange poses in places like streets, oceans and deserts. The results are beyond amazing!

We have earlier seen some of interesting models of e-bikes like Electric Bike PiCycle LTD by Pi Mobility. But today we will show you bike with exclusive design by well-known brand Audi. The Audi’s e-bike Wörthersee looks futuristic at the very first glance and it’s neither a conventional bike nor a pedelec, but is best described as Audi’s high-end pedelec made for fun, tricks and sports. “The Audi Wörthersee is a bike for tomorrow and beyond; all its components, including the pedals even have been shaped by the master Audi designers.

Bryce Canyon National Park is located in southwestern Utah in the United States. Bryce Canyon which, despite its name, is not a canyon but a giant natural amphitheater created by erosion along the eastern side of the Paunsaugunt Plateau. Bryce is distinctive due to geological structures called hoodoos, formed by wind, water, and ice erosion of the river and lake bed sedimentary rocks. Some of these hoodoos are up to 200 feet high. The red, orange, and white colors of the rocks provide spectacular views for park visitors.

At first sight, his illustrations might seem funny, but when you look closer, they actually show some serious problems of today’s world.

Born in 1976, Pawel is a graduate of Fine Arts Academy in Poznan. The artist began drawing satirical illustrations back in 2004, and so far has been “rewarded with 92 prizes and distinctions“. In 2005, Pawel Kuszynski received “Eryk” award from Association of Polish Cartoonists for getting a record number of awards in international competitions

You can order his posters in high quality at toonpool.

In his exhibition in Kunsthaus Baselland organized last year, Gal Weinstein presented his latest series of works, “Fire Tires”. The motif of burning tires is a universal code which we associate with socio-political unrest, revolution, and also with various, mostly pagan customs. “Car tires are cheap fuel,” says the artist and thus also explains why this material is used worldwide, when a fire is started for fun or – as we increasingly experience it – fire kindled as a symbol of (political and social) upheavals. The tires are moulded from wax, the construction material consists of polystyrene foam and the surface of the smoke clouds consists of artificial pillow filling, complemented by multi-coloured graphite dust. 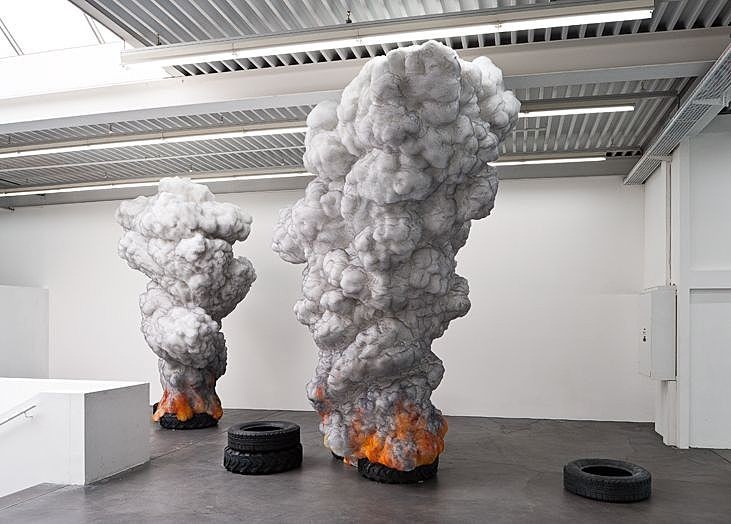 The Honey Hunters of Nepal

Honey hunting is one of the many activities that form part of the ancient culture of numerous civilizations. Scientists have estimated through rock painting documentation that honey hunting was practiced as far back as 13 000 BC. In Nepal, honey hunting has been practiced for thousands of years and is a vital part of the Nepali culture.

Some villagers in Nepal depend on honey hunting for their livelihood, and the country is home to the Apis laboriosa, which is the biggest honeybee on the planet. These bees construct their hives on the cliffs of the country’s foothills, and watching the honey hunters at work is a sight to be seen. Due to the location of the bee hives, honey hunters make use of rope ladders and baskets to get to the combs after the bees have been flushed out with smoke by lighting a fire underneath the hives.

Honey harvesting usually takes place twice a year, when honey hunters get together and head into the Himalayas to take on this massive task. To harvest one colony takes the honey hunters two to three hours depending on the location of the hive and its size. 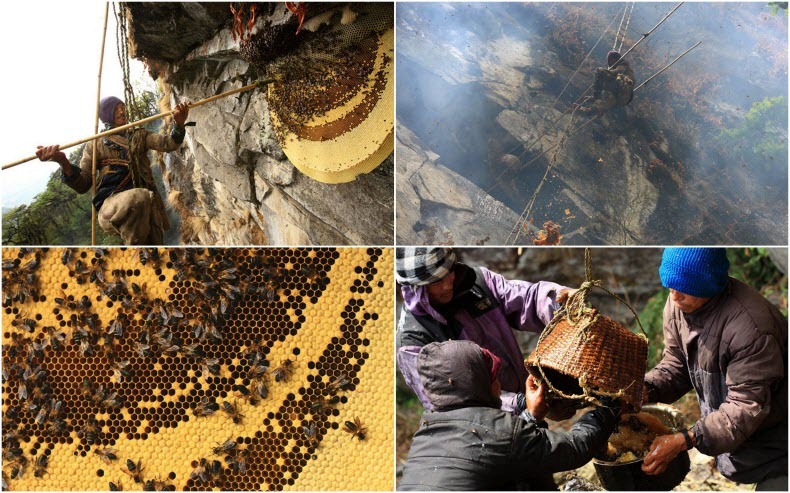